Hello everyone. Here’s my rosette cupcake topper tutorial. I first started making these rosettes for horse themed cupcakes, but I quickly realised I could do so much more with them! They can be suited to many occasions such as Father’s Day, Mother’s Day and birthdays! You can put any message you want in the middle, making them very versatile. The cupcakes above were made for Father’s Day. I have also included a tutorial showing how I made the star cupcake at the bottom of the page. If you came to this page looking for horse themed cupcakes, you may also be interested in my other horse cupcake toppers.

Post Update! I have added a Mother’s Day rosette topper design to this post. You can jump straight to this tutorial here.

The rosettes are made out of white Renshaw Flower and Modelling Paste. You need to make the middle part of your rosette a day ahead. This gives it time harden, so you can write on it. You also need to colour some of the modelling paste with your chosen colour. I used PME Ocean Blue . You only add a tiny amount of paste at a time to achieve your desired colour. I use a toothpick so I don’t add too much. You could also just start with some ready coloured modelling paste.

For quickness and ease I used a cake craft pen to write in the middle of the rosette. You can also use numbers cut from modelling paste, or even pipe your words with royal icing too. I have included a variety of examples after the tutorial.

Roll out some white modelling paste and cut out a circle. Leave it to harden overnight.

Roll out your coloured modelling paste and use your fluted cutter to cut out a circle. Use a toothpick to clean the edges if necessary.

With the fluted edges as a guide, use the blade tool (or you could try the side of a toothpick) to mark indents from the outside to the middle of the circle.

Carry on marking indents all the way around the circle.

Carefully lift up the circle and using the bone tool, gently make the curved indents around the edges more prominent. If you don’t have this tool, you could try a round handled spoon or straw.

Once the white modelling paste has hardened you can now write on it with the edible pen. To make sure your writing is in the centre, find the middle and then go down slightly and write the a. You can then fill the rest of the letters and words around this.

Using a little glue, stick the white circle onto your rosette.

To make the ribbons, roll out the coloured modelling paste and cut two strips about 5cm by 1cm. Cut out a triangle from the bottom of each one.

Using glue, attach the ribbons to the main rosette and leave to dry.

Below is a video of me making the rosettes.

Below are some examples of the rosette cupcake toppers I have made. They were all coloured with Colour Splash Pale Pink.

If you wanted to make some matching star decorations to go on other cupcakes, simply roll out your modelling paste and cut out a variety of star shapes. You can then play around sticking them on top of each other and make your own designs.

Applying your cake toppers to your cupcakes

You can either use a spatula to put some buttercream on top of your cupcakes or you could pipe it on like I have done. I used a 2D flower drop nozzle. This is one of my favourite nozzles but you can obviously use whatever you have. The photos below show step by step how I piped with this nozzle to make which a swirled rose effect.

Holding the piping bag straight down, start in the middle and just above the cupcake. Apply pressure to the bag so you create a star shape. Lift the tip slightly and now move to the outer edge of the cupcake. Keeping an even pressure, pipe all around the edge of the cupcake. Keep going round until you reach the beginning again. Now slowly release the pressure and lift up breaking away from the cupcake. Since writing this post I have also made a video showing how I pipe a buttercream rose swirl. You can view this video here.

Once your buttercream is on your cupcakes you can now apply your cake toppers! If you didn’t want to use buttercream, you could always cover your cupcakes with circles of fondant, using a little jam to help it stick.

Items Used In This Tutorial

Below is a list of items that I used in this tutorial.

A Cake On Life is proud to be an affiliate for The Cake Decorating Company, the Uk’s largest cake decorating supplier. I have also included affiliate links in the list below. I earn a small commission if you purchase items via my links. This is at no extra cost to you, but allows me to keep creating my tutorials.

Since writing this post, I’ve made a Mother’s Day rosette, which you can see below. It’s a variation on the Father’s Day one that I made above, although still very similar.

Below are the steps I used to make this rosette cake topper. I used Renshaw Flower and Modelling Paste in White and Daffodil Yellow and I coloured the royal icing with PME Hot Pink food colouring paste. I also used PME wavy edge cutters.

Roll out some white modelling paste. Cut out a medium sized circle from the set. Leave to harden.

Roll out the yellow modelling paste. Cut out a large sized wavy circle from the set.

Next, cut out two strips to be the rosette ribbons. Once you are happy with the size, cut out a triangle piece from each end.

Stick the ribbons onto the main rosette as can be seen above. I use a little vodka to do this, but you can also use edible glue. Turn the rosette over to the correct way up and leave to harden. I usually leave mine overnight.

Next Day : Make up your royal icing as per your written instructions. Colour with your chosen colour. I used a a PME No 2 piping tip to pipe my letters. A little note on piping, if you need help tidying up your letters a touch of vodka on a clean paint brush can help to do this. I show how I make my piping bags in another post, which you can get to here.

Once you have finished piping, you can stick the disc onto the rosette with a little vodka or edible glue. Now you are ready to decorate your cupcake!

If you liked this tutorial why not save it for later? Hover or tap on the image below and hit the Pin It button! I also add all my posts and tutorials to Pinterest, which you can follow here.

Until next time, happy caking! 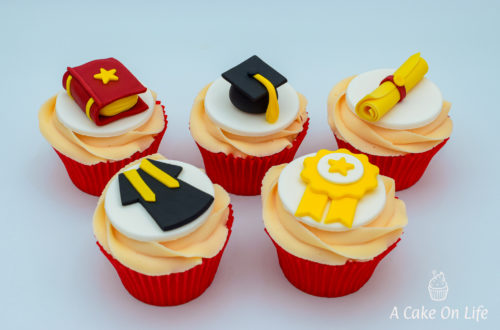 How To Make Graduation Cupcake Toppers 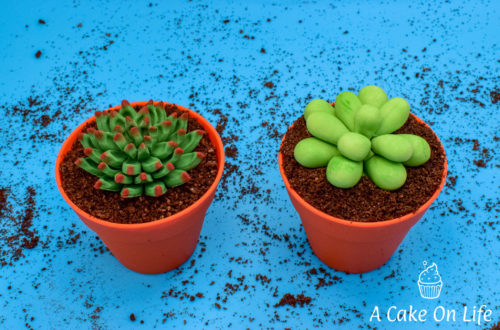 How To Make Succulent Cupcake Toppers 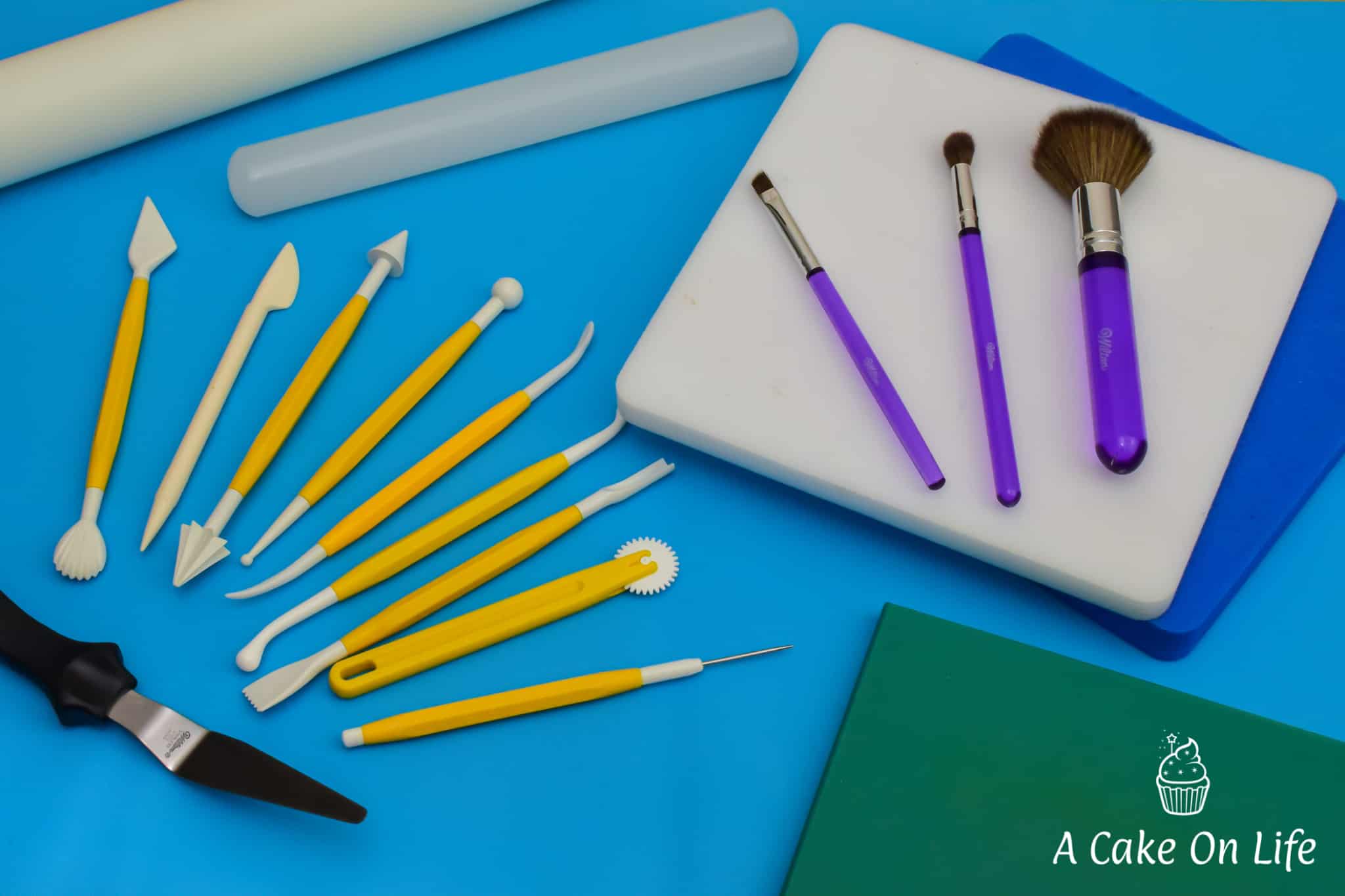