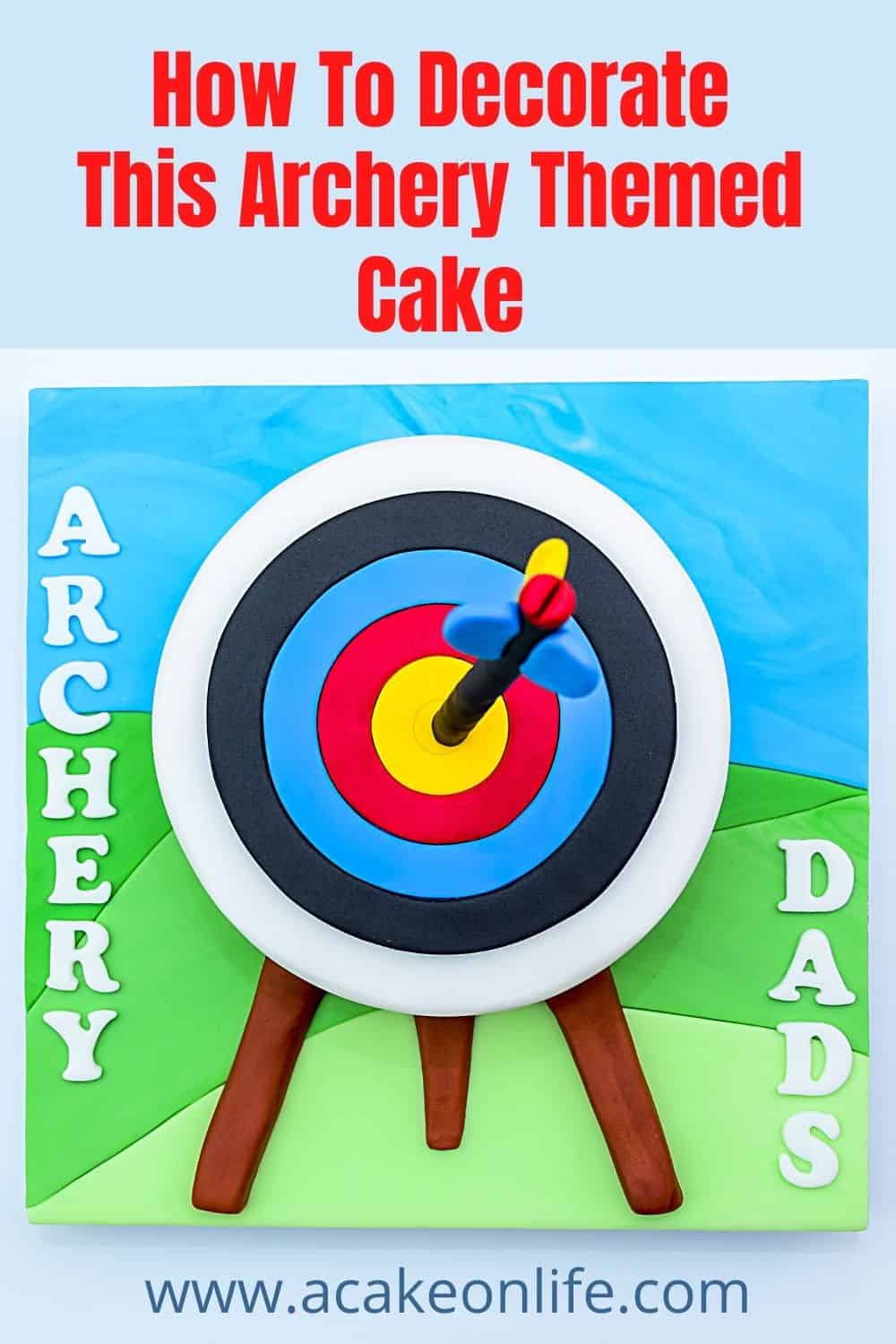 Hi all! This posts shows how to make an archery themed cake! I made this cake for Father’s Day as both my husband and step-dad do archery. It’s just a fun and quick 3D illusion cake, that’s easy to make, so I thought I would show you all how I made it.

Before I carry on, I would just like to inform my subscribers that I’ve recently updated my succulent cupcake tutorial post to include the other two cupcakes. If you would like to take a look, then click here. Right! Now on to the archery target cake tutorial!

The cake was a 7 inch round chocolate cake. It was filled and covered with chocolate ganache and then covered in white sugarpaste/fondant. The cake was on a 12 inch square cake drum.

You can see from the image above that I used white, green, black, blue, brown, red and yellow fondant to decorate this cake. To create different shades of green I just kneaded the green fondant with some of the white. I also used a variety of items of different sized circles, to help create the target. I found ones that were spaced evenly apart. These ranged from the base of a cake tin to a tupperware tub and a circle pastry cutter. As always, I used vodka as my glue to stick the fondant when necessary.

I like to fill and cover my cakes the day before I decorate them to give the fondant time to dry. That way it can be handled much easier without marking. The cake board and cake were all decorated the following afternoon. I started with the cake board first.

How To Decorate The Cake Drum (Board)

To decorate the board I used different coloured green fondant. I rolled out the fondant and then placed it on the board using a little previously boiled water to help it stick. I trimmed the edges and then used a pizza cutter to cut a curved shape to create a hilly landscape.

In the image above you can see that I applied the green fondant in stages. I started at the bottom and worked my way up the board. TOP TIP : Make the hills big so the next layer of fondant will easily curve around them.

For the sky, I mixed blue and white fondant together and then rolled it out. I trimmed it to a similar shape to the hills and then stuck it on the board. I trimmed the edges and then used a cake smoother to smooth out all the fondant and ensured all the shapes fitted together seamlessly.

To make sure I put the back leg in the correct place, I used a 7 inch cake board as a guide, as can be seen above.

I marked the outline of the back leg with a knife.

Then I cut out the section.

Next I filled the section with brown fondant.

Next, I placed the cake on the cake board.

Then I made the two front legs by shaping two pieces of brown fondant. They needed to be bigger than the back leg to give a 3D illusion. You can see from the image above that I made the back leg a little longer as I felt it looked too short when I added the cake.

Decorating The Cake To Look Like An Archery Target

Decorating the cake began with black fondant strengthened with a little PME CMC Powder Personally, I find black fondant very soft, so I like to strengthen it by working a little CMC powder into it.

I rolled out the black fondant on some greaseproof paper (parchment paper) and cut out my circle. I left this for about 20 minutes to firm. This helped to prevent distorting the shape when placing it on the cake.

I marked the next circle.

I cut out and removed the circle.

Next, I used the same item to create the second circle out of blue fondant. It’s a good idea to use the greaseproof paper to help maintain a circle shape.

Placing the blue circle inside the black I then smoothed with a cake smoother.

My next circle was a pastry cutter. If yours is a cutter you can gently cut it out. If not, make an imprint of the circle and then cut it out.

Using the same cutter I made a red circle and placed it on the cake.

For the smallest shape, I used a fondant circle cutter.

Using that same cutter, I made a yellow circle. I placed it on the cake and smooth with a smoother.

To mark the centre of the target I gently made an indent with the larger end of a piping tip.

It was at this point that I added my words. I just cut them out using letter shape cutters. The fondant was again strengthened with CMC Powder.

How To Make The Arrow Cake Decoration

To make the arrow, I used a wooden skewer and covered it with some of my black fondant.

Firstly, I placed the the skewer in the cake to see how far it went down. You can mark this with an edible pen if you have one. I also trimmed the skewer at the top to about 16cm long, as I felt it was too long and may bend under the weight of the fondant.

Next, I rolled some black fondant into a thick sausage shape.

I brushed some edible glue onto the skewer.

Once all the way through, I gently rolled the fondant spreading it along the skewer. Remember to keep the pointed end free up to the depth of the cake.

Using a cake smoother helps to ensure a nice smooth finish. Keep rolling until you can no longer see the end of the skewer.

To keep the skewer upright I put it in a glass filled with rice.

I added some CMC Powder to blue and yellow fondant and then shaped some fletchings as can be seen above.

I stuck the fletchings on the skewer, as can be seen above. Note, that you may have to hold them in place for a while to fully secure. Lastly, I stuck a small piece of red fondant on the top, shaped it in line with the skewer and marked a line indent.

Adding The Arrow To The Cake

After leaving the arrow for a while to firm up and giving the fletchings time to dry, I inserted it in the cake. I followed the hole I had previously made with the skewer. I found that either having the arrow completely straight down or only slightly tilted is best. This puts less stress on the wooden skewer as it’s taking the weight of the fondant. How long your arrow is will depend on the depth of your cake. The shallower the cake, the shorter the arrow. Also, make sure the skewer goes all the way down to ensure it has a solid base.

I hope you found this tutorial helpful!

If you like this tutorial, why not save it for later? Hover or tap on the image above to Pin It for later. All posts and tutorials are also all added to Pinterest, which you can follow here.

A Cake On Life is an affiliate for The Cake Decorating Company and an Amazon Associate. I may earn a small commission if you purchase products via my links. This is at no extra cost to you, but allows me to keep writing these tutorials. I only suggest products that I like and use myself. 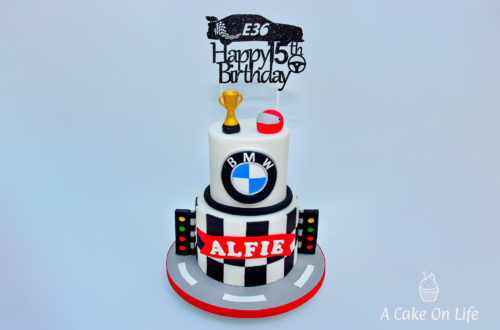 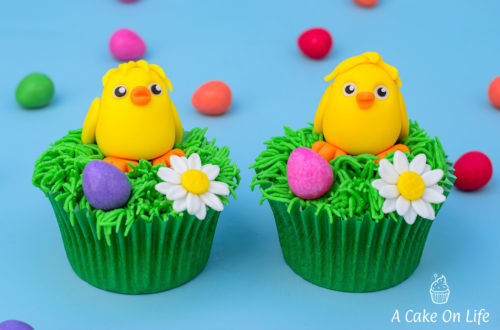 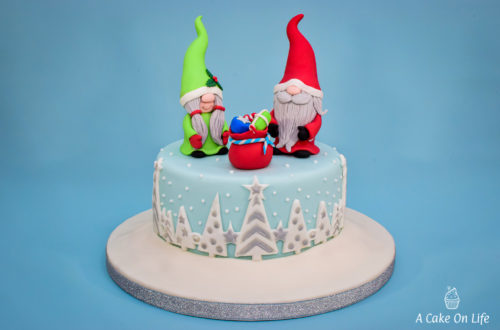